I’m back in Shanghai and faced with the pollution problem once again. Here a quick update on the last months. You can clearly see a reduction in pollution around Chinese New Year, when factories are shutting down. With warmer weather the readings also seem to be lower. I don’t know the reason, but anecdotal evidence gives the same effect for Beijing. An expert from Vienna University of Economics is currently analyzing the data and correlating it with weather observations. I’ll give an update, when some results emerge.

Here the histogram for the same period. Even though pollution is often bad, the large majority of readings are below 100. I wonder , if the high readings occur during the day or at night, when most people are inside their homes. This could have an effect on actual pollution exposure. 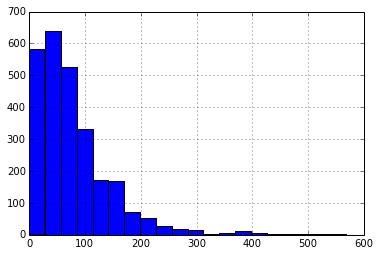